Nigerian champions Enyimba FC are in battle again, few days after they drew the short end against Ugandan champions Vipers FC in a first round, first leg CAF Champions League encounter in Kampala.

This time, the People’s Elephant are up against Federation Cup winners Akwa United of Uyo in the annual Charity Cup match, in what is billed to be a titanic session at the National Stadium, Abuja on Wednesday. The Charity Cup traditionally opens the football season.

On Saturday, the boys from the Land of Promise boldly promised more, by beating more experienced Vita Club Mokanda of Congo 1-0 in Pointe Noir in a CAF Confederation Cup first round, first leg match.

Enyimba FC have returned from Uganda feeling a sting, and it is the right time to let off steam and regain confidence ahead of the return leg against Vipers FC.

Enyimba boast three of the best goalkeepers in the land, namely Olufemi Thomas, Moses Ocheje and Theophilus Afelokhai. Afelokhai was in action in Kampala, but any of the three can do a great job any day. They also have on their books Super Eagles’ aces Chima Akas, Kalu Orji and Ezekiel Bassey, as well as other decent names like Chinedu Udoji, Ugwu Uwadiegwu, Christian Pyagbara, Bartholomew Ibenegbu, Daniel Etor, Mfon Udoh, Andrew Abalogu, Oladapo Olufemi and Nzube Anaezemba. 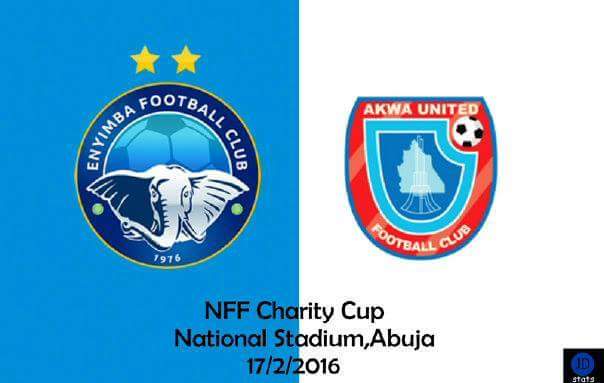 Posted by Nigeria Sports Arena at 04:46