NFF President  Amaju Pinnick through his special adviser on media Calistus Ebare, offered an interview to www.scorenigeria.com, disparaging the personality of Chief Patrick Ifeanyi Ubah whom he described as a liar following unfounded rumours or stories credited to the FA chairman of Anambra state

The report stated unequivocally that the NFF did not collect a dime from Chief Ubah to offset the salaries or arrears of Super Eagles head coach, Gernot Rohr, whereas in the contrary,  Chief Ubah says he played a big part in how Rohr's salaries were paid from the onset and has demanded a public apology within the next 48 hours or he will take legal actions against the leadership of the football house.

This is set to open a fresh crisis in Nigeria as the chairman and CEO of Capital  Oil and Gas, Dr Patrick  Ifeanyi Ubah, open a can of angry worms, that will reveal massive corruption within the football house in Nigeria.

Chief Ubah in his first official reaction on the matter posted on NSM REBRANDED,  a Whatsapp forum that currently serves as the mouthpiece of Nigeria football stakeholders.

"Gentlemen of this platform..
It is very disappointing that the Leader of our country's football organisation will lie against all I've done to support him and Nigeria Football . I will make my position known through my lawyers and media aides on Monday, September 18."

Meanwhile, as we await this latest drama, our source can confirm on good authority that Dr Patrick Ifeanyi Ubah through his company Capital Oil and Gas, bailed the NFF from many crisis during their turbulent moments.

At that point, when Paul Le Guen dumped Nigeria after he refused to show up for a hurriedly arranged interview, the NFF needed a bailout and Chief Ubah came to their rescue both in cash and kind as the football house went in search of  Franco/German, Gernot Rohr, who has today steadied the ship of Nigeria football.

Chief Ubah, as we were made to understand, helped to offset the first five months of Gernot Rohr's salary, which the NFF in return, retrieved from their quarterly budgetary allocation.

Chief Ubah came to the rescue of the Nigeria football federation and the National sports commission when the Under-23 Eagles were stranded in Atlanta, Georgia, after three weeks of camping in Gods own country. The uproar that followed that national disgrace left many Nigerians cursing the NFF and it was Chief chief Ubah who dipped his hand into his pocket to safe another potential national embarrassment.

After the Eagles ill fated 1-1 draw with Egypt in Kaduna, the team needed someone to bail the football house with funds that will enable them chatter a private jet to airlift the the Super Eagles to Egypt for the return leg, again, chief Ubah offered the olive branch for the Eagles to make the trip.

To imagine, that Pinnick is now demanding that Ubah provides evidences of favours rendered the federation is baffling and very unfortunate according to a very close source of the oil magnate .

At the heat of the CAF elections, when it became obvious that Pinnick was desperate to wrestle away powers from the Benin Republic FA president Moushafu Anjorin for a CAF executive committee seat, the NFF president ran to Dr Patrick Ubah again for help and the billionaire businessman offered him his private jet to airlift a strong delegation that includes former CAF executive committee member, Amos Adams,  to Cameroon, where they went to lobby former CAF president Issa Hayatou to support his CAF ambition.

All these and many more will be revealed in an evidence filled document that will go public in the coming days according to our source who is a close source to Dr Ubah.

The source also made mention of the coming of infantino and Samoura to Nigeria prior to the CAF elections but held back on providing details on the role played by Dr Ubah in that visit.

This visit and the support rendered Ahmad Ahmad in the run up to the CAF presidential election are part of a large scale revelation that will go public soon said our source.

Chief Ubah has however denied stories making the rounds that he is desperate to contest the position of NFF president, insisting that what matters to him is to see to the growth and development of Nigeria football through private sector investment and promotion.

In the last two years, Dr Patrick Ifeanyi Ubah has established himself as a major force not only in Nigeria but Africa football with the setting up of FC Ifeanyi Ubah, a football club that defeated all comers to win the 2016 NFF federation Cup (now Aiteo Cup) . He later went on to represent Nigeria in the CAF confederation cup competition.

The FC Ifeanyi Ubah international stadium has become a landmark reference point in Nigeria football as the best privately owned stadium ever built in Nigeria.

Dr Patrick Ifeanyi Ubah's 1 football, 1 family programme could turn out to be,  the biggest youth football festival ever seen in this part of the world as the gospel of the beautiful game will soon spread to 50,000 homes in the 21 local government areas of Anambra state. 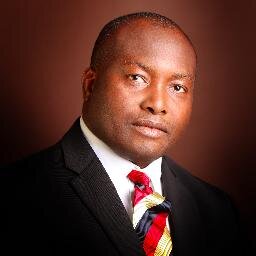 Posted by Nigeria Sports Arena at 16:13 No comments: