Match day 28 of Nigeria Professional Football League (NPFL) witnessed some interesting displays from 11 players who helped their respective teams to a glorious and remarkable outing.

The head coach of Lobi Stars Football Club of Makurdi, Godwin Uwa tutored his charges to a 1-1 draw against high flying Imama Amakpakabo Enugu Rangers team who have not drop a point in over nine league matches. Uwua will be managing the Supportthenpfl.com Team Of The Week (TOTW) with a 3-4-3 formation.

John Kelechi gave a very good account of himself against reigning league champions, Enyimba International Football Club of Aba as they recorded a convincing 2-0 victory over the Aba star studded side.

FC Ifeanyi Ubah muscled out a point against Oriental neighbour, Heartland Football Club of Owerri with Lekan Adeleye playing a pivotal role in ensuring that his team leave the Dan Anyim Stadium with a valuable point.

Mountain of Fire and Miracles Ministries Football Club defensive midfielder, Atu Irumekhai Paul led coach Fidelis Ilechukwu lads to one of the their best away performances by keeping Kano Pillars FC mercurial midfielder, Rabiu Alli
quite in the game that ended in a one nill victory for the host. He also forced the Sai Masu Gida goalkeeper, David Obiazo to a top save when he pulled the trigger from close range.

Tayo Adebogun inspired relegation threatened Shooting Stars Sports Club 3SC) of Ibadan to their 5th win of the second stanza under the tutelage of coach Gbenga Ogunbote, he opened the score sheet and also assisted Sunday Adetunji to double the lead as the Olukoya Boys pulled a 3-1 win over Niger Tornadoes FC of Minna.

Zakary Baraje and his wards secured a resounding 2-0 win over Enyimba FC with Obaje scoring one of Plateau United's goal against Enyimba FC. He was a nightmare for the NPFL champions defence.

Kano Pillars FC laboured to a 1-0 win over MFM FC but one man, Amos Gyang stood out in that game though he was not the one that scored  the match winner but his contribution in the encounter earned him the man of the match award. He has been selected to complete the four man midfield.

Three players who shone like a million star for their respective clubs netted four goals between themselves.  Kingsley Eduwo equaliser against Enugu Rangers FC gave Lobi Stars FC a valid away point as they forced their host to a 1-1 stalemate.

Sunday Adetunji scored twice in 3SC's 3-1 victory over Niger Tornadoes,  his performance was second to none. Abdulrahman Bashir has been phenomenal for Nasarawa United in recent times, he got his six consecutive goals against Ikorodu United on Sunday in his last six league matches. He will be joining Adetunji and Eduwo to complete the three man attack. 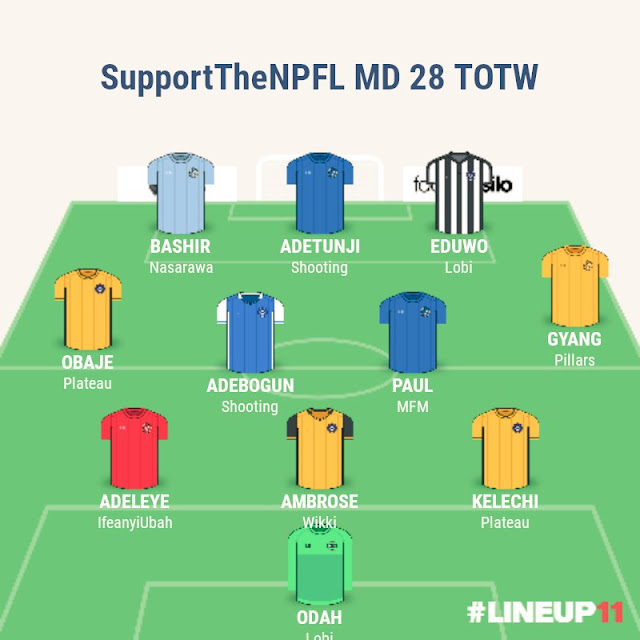 Posted by Nigeria Sports Arena at 03:59 No comments:

Email ThisBlogThis!Share to TwitterShare to FacebookShare to Pinterest
Labels: NPFL, Supportthenpfl.com, Team of the week

Oluwatomiwa Babalola put Goal.com Nigeria in front few minutes into the first half after  a well worked out counter-attacking move. Samuel doubled the lead for Goal with three minutes to end the first half.

Olawale Adigun tutored side came out strong in the second half and forced their opponents to their own half after a  wonderful display of great artistry of Football.

Intelligent central midfielder, Yomi Kazeem upped his game when he pulled  a cool finish off a rebound from super-sub  Larry Eghosa who came in to replace Adepoju Tobi  Samuel.

Yomi completed his first brace of the tournament with another great finish when he connected a lovely pass from Larry.

Nuru Oladipupo gave Top Radio the lead when he beat his maker and put the goal beyond the goalkeeper. He scored his second  goal of the day minutes after the third goal.

Martin Ifodo was introduced for Nuru, he gave a good account of himself as he notched  the fifth goal for his side in an emphatic fashion. The game ended in seven goals thriller with Top Radio claiming a 5-2 win.

Top Radio will be up against Silver Bird Television on Wednesday in their next SWAN Cup match. 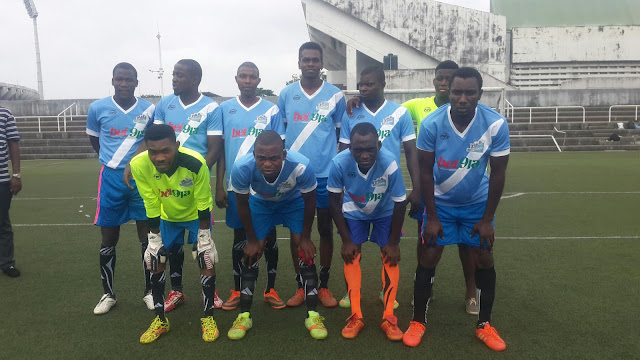 Posted by Nigeria Sports Arena at 06:08 No comments: