Osun United Football Club striker Tosin Omoyele, has been named player of the season by the Sports Writers Association of Nigeria (State of Osun chapter) at their meritorious awards ceremony in Oshogbo, Sunday afternoon.

Omoyele was honoured at the Atlantis Civic center after netting 15 goals for the Omoluabi Giants in the Bet9ja Nigeria National League..

The prolific gifted striker has been linked with a move away from Osun United, but was delighted to pick up the award ahead of the team captain Hakeem Olalere and defender Kehinde Adeyemi, who were also listed for the award.

Omoyele, played a pivotal role for Omoluabi Giants at the just concluded season with his side finishing seventh spot on the Southern Conference table log. 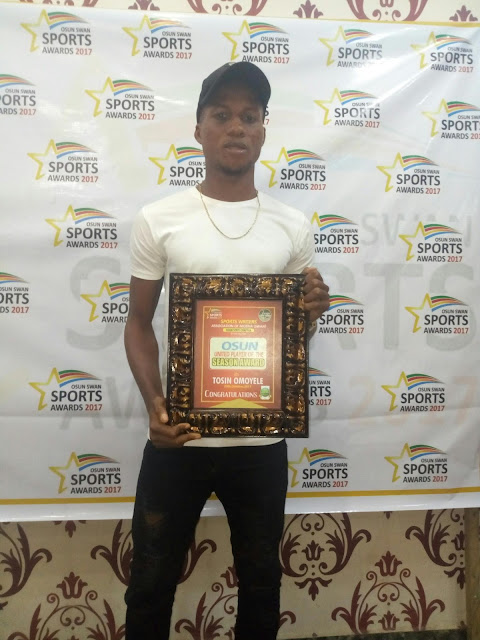 Posted by Nigeria Sports Arena at 22:38 No comments:

SWAN to install Ogunjobi as Osun 'Pillar of Sports'

Former Secretary General of Nigeria Football Federation, Chief Taiwo Joseph Ogunjobi, will be installed as the ‘Pillar of Sports' in the State of Osun on Sunday October 29, 2017 by the Sports Writers Association of Nigeria SWAN Osun chapter, at Atlantis Civic Event Centre, Oshogbo.

‘Osun SWAN Sports Merit Awards’ is aimed at celebrating those who have rendered outstanding services to the development of sports in the country and beyond.

Chairman Osun SWAN, Adeyemi Aboderin, said they considered Ogunjobi for his track records both as a player and administrator whose era as the Secretary General to the NFF witnessed appreciable success.

Aboderin stated further that the Chairman Osun Football Association, track records and contributions to sports development in Nigeria speak volume and gave him edge above other considerations, having contributed immensely to the empowerment of youths in the state and South-West in general through sports.

“We are aware of the progress made so far by the State of Osun in football since he assumed office and for his meritorious service to the development of football in the state and beyond,” he said.

The event will also be used to confer ‘Prestigious Award’ on some individuals who have contributed to the development of football and other sports in Nigeria.

Notable personalities expected to grace the grand event includes the Royal Father of the day, the Ooni of Ife, HRM, Oba Enitan Adeyeye Ogunwusi (Royal Grand Patron of Osun SWAN), Royal Host is the Ataoja of Osogbo, HRM, Oba Jimoh Olanipekun, and the Speaker Osun House of Assembly, Rt. Hon. Najeem Salaam (Patron of Osun SWAN), will be the chairman of the occasion. 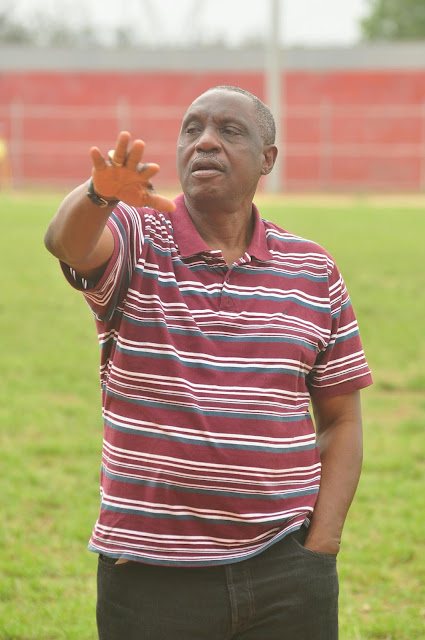 Posted by Nigeria Sports Arena at 00:54 No comments:

The game will be played at the Main Bowl of the Kwara Stadium as they are both drawn in Group A, disclosed the General Coordinator of the most elaborate Pre-Season tourney, Tunde Shamsudeen.

"The fixture of the 10-day tourney has been drawn, as the trio of Remo Stars, Crown FC and debutants Rivers United completes the group which has been tagged 'Group of Death'.

There will be other Group A matches as two known gladiators in the Gold Cup tourney, MFM FC and Tornadoes renew their rivalry when they draw swords at Kwara Football Academy practice pitch B.

It will be an emotional one for Coach Fatai Osho as he will be leading his Remo Stars against his former team, Crown FC at the practice pitch A of the KFA.

Posted by Nigeria Sports Arena at 00:31 No comments:

No fewer than 30 ex-Nigeria International Footballers, Coaches and Sports Administrators who have made their mark in contributing to the   football in Kaduna and the nation were on Sunday honoured by immediate past Senator representing Kaduna Central, Senator Sani Saleh.

One of the group matches of the ongoing Senator Sani Saleh Peace and Unity Cup which was played at the Ungwan Yelwa Primary School Football Field in Kaduna between star studded Narayi and Sabon Gari ended in a goalless draw after both teams failed to convert chances.

The exciting game was indeed a huge success as spectators trooped in to be thrilled with lovely football skills.  Players and officials who have made Nigerians proud in the past were called up at half time to receive an honorable award for their services to humanity.

Some of the notable recipients are ex internationals, Emmanuel Babayaro, Garba Lawal and Ishaya Jatau.

Wife’s and children of some deceased players and officials were also presented with bags of rice, gallons of vegetable oil and cash awards.

Earlier, Efe Ambrose had presented an authentic version of his jersey to Senator Sani Saleh as an appreciation for his contributions to development of football at the grassroots.

At the end of the competition, winners are expected to win a brand new Sharon Space Bus, runner-up will smile to the bank with one million Naira, while second runners-up are expected to get N500,000.

Posted by Nigeria Sports Arena at 08:00 No comments: